Fits tightly, easy to fine tune, and comfortable to use.

Good quality and easy to install

Very well made pouch should provide many years of rough service. Ordering, quick shipping, unlimited adjustments, what else can one ask for. Will purchase again for next rifle

I am making my own personal slings using 1.5" stock and this product is of high quality and fits all my personal needs very well. I would recommend this product.

2 inch sling swivel fits perfect on my custom made sling. This is the only company that I could find selling the 2 inch one. Everyone else only had the 1.5 inch.

The Sniper Stockpack is exactly what my single-shot rifle needed. The design is effective. My comments apply to the model I bought. Other models he sells may be different. There are five elastic loops inside my stockpack that will hold a variety of ammo, though I think some of them have six loops inside. I can put five 45 caliber rifle rounds in mine, so it will hold a large round, but I would not try it with a shotgun shell. I think a .50 cal would also work, but you might not be able to use all five loops--not sure. I think the loops are too big for .22 cal. With the ammo in the loops, there is still space for other items in the pack. I love that I can zip the compartment closed and my ammo is protected from dirt, dust, debris, and most importantly--from loss. I hunt in thick vegetation, in all weather, so this enclosed pack is essential. It comes with another set of six loops that are velcroed to the outside of the pack. I don't use those, but you could. It has an adjustable loop that goes around the back end to keep it from sliding forward. It comes with extra velcro strips that go on the inside so you can use the raise the comb for the correct cheekweld. In my case, I didn't need them. The velcro fasteners that hold the pack to your buttstock are strong and hold the pack securely. Overall, I've hunted with it twice now and had zero issues. A couple of things to know: the more ammo and other items you put in the pack, the more it will change the balance of your weapon. This is not a problem for me, it's just a fact. Importantly, the design is such that you do NOT just fold the pack in half and set the middle of it on top of your buttstock--this is intentional (I asked the designer). The fold is more toward the cheek side so that the top of the buttstock and the cheek side have the smooth padded surface and the far side has the zipper and the pack. You do NOT want the zipper on top of your buttstock. Initially the stockpack will want to just fold in half, so you have to condition the pack to fold where you want it to--just fold it firmly at the correct spot and holding it in that position. Do that a few times, then put it on your weapon. I am a retired Army, Infantry, Ranger, so I'm particular about function. I also want it to look like I mean business. This is a great product.

This is pack #4 for me (2 coyotes, a grey/ blue, and now this OD green). All have been good quality. I installed the grey/ blue on this rifle initially because of the grey laminate stock, but when I got it in the sun, I could really see the green in the grey laminate material, so I replaced it with this OD green pack. MUCH better. These are easy to install and seem well made. I don’t use my rifles hard but have no doubts they will hold up for their intended uses.

Built like a tank, works as it should, makes excellent shooting aid

My son loved his! It fit great and is very useful holding his ammo and clip when not in use. Fast shipping also!

Great product, very good quality, and fast shipping. Once fitted to the butt stock it's a solid effective tool. For my setup I can easily keep eleven extra rounds at the ready on the butt stock and probably throw another 20 round box in the zipper pouch in a pinch. The material is durable and will be easy to maintain. Will be a returning customer for sure.

I've tried several others, and this one is the best. Fits the stock correctly, and the cheek pad is the most comfortable as well.Quality construction and very fast shipping.
Great experience and that's why I keep coming back.

Fast shipping and item was as expected. Easy installation and setup.

Bought these to fit onto an extra-wide Tab Gear Biathlon sling.....they work just fine and attach perfectly into my qd cups

These cuffs are great. I have three and all are well made. They give me just the right amount of cheek rise and it is quickly reversed if need be. They are very adjustable so they will fit a wide variety of stocks. None have seen hard use yet but they seem up to the task. Should I determine otherwise I will report back.

Very happy with it.
Got one for my CZ 557 Ranger.
The fit is perfect and once the straps are tightened up, it won't move.
These guys were nice enough to give me a discount in order to offset the shipping cost to Canada.
Pretty sure will get another one of those at some point.

The Hunter Stockpack for my Savage 110 Timberline (7mm Rem Mag) fits great! It is well built and the micro-suede cheek pad is SO much better than the stock plastic comb. The Savage comes with multiple replaceable comb heights, but I chose a lower one and used the provided velcro strips to raise the cheek height (super easy and adjustable). That way I can easily remove the pack and have clear access to the bore for my cleaning rod. The zippered pouch is very convenient and allows storage of ammo, a battery, Allen wrench, ID/tag, etc. Love this pouch! Thanks, Bill for the awesome customer service! Would highly recommend his products. 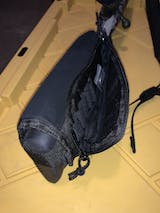 This is the only place I have found with a truly 1.5" inside diameter sling swivel. And find out they went they had the tools made to do that and put up the up front cost to do it is ,AWESOME. I made 1.5" straps, found 1.5" tri-glides, a 1.5" 2 to 1 tri-glide and a 1.5" spring cam buckle . This was the last piece after the q d. post I found. Again, Thank You , very much . You guys rock. So happy some one cares about feeling the need for small , but very much needed part .

Very well made. No reason to spend twice as much for others that offer less. Stays in place and carries what is needed. Comfortable cheek weld. A+++

Bottom line is I will be purchasing more for other rifles.

Quality is excellent and service is top notch!